Last night I suited up and went to a local town hall held by the office of New York City's Comptroller, Scott Stringer. (I am in the fuzzy foreground of the second photo.) After very short introductions from the venue host (CUNY Law School), Stringer and his staff, we went straight to questions!

I appreciated a lot of things about the event. There was an ASL translator on the stage, and when residents wanted to ask questions in Spanish, a staffer translated between Spanish and English for them. Stringer kept the lines moving by answering folks' questions but also limiting them to one question each (or they could head to the back of the line to get another turn), and interrupted rambly rants by asking for a question he could answer. And if people spoke up with complaints, he promised: fill out a constituent intake form and give it to one of my staffers, and we will call you by noon tomorrow. And free bottled water, next to the paper copies of audit reports and outreach flyers, was a nice touch. 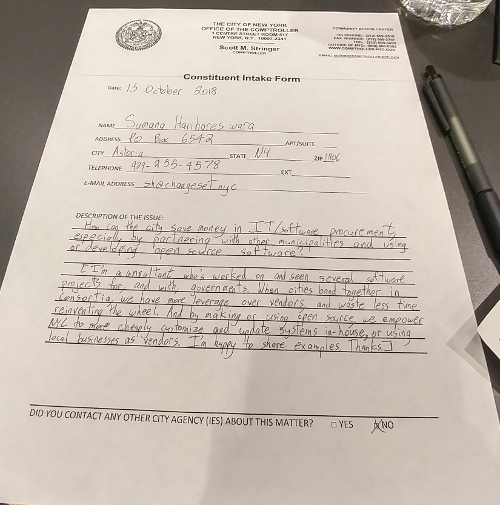 I asked the first question: how can we save money in IT procurement? Perhaps by banding together in consortia with other municipalities to have better leverage with vendors, or making or using open source software? I fear I was not very clear and was misunderstood. Stringer replied by talking about the need to modernize the procurement process itself, which is evidently still paper-based and slow, and about how this depends on revising the City Charter. Wendy Garcia (the office's Chief Diversity Officer) followed up by suggesting that I myself might want to come to their office so they could help my business figure out where our services matched up with the city's contracting needs. [I spoke with her after the town hall to clarify: no, I'm not trying to get business for Changeset here, I'm just interested in the issue! (Maybe I misguided them by introducing myself as a consultant and wearing a suit. The suit was just to respect the occasion! Next time maybe I will wear a stylish dress and cardigan, which seems to be what middle-class women activists wear to these things??)]

I filled out a constituent intake form, and, sure enough, just before 10:30am today, I got a call from their office asking me to email a specific staffer with more details! Well done.

Other questions and answers included a wide variety of concerns: older guy who doesn't like streets getting named after politicians, frequent meeting questioner guy whose stuff was taken (and never returned) when he was arrested in 2015, the Major Capital Improvement rule landlords use to get around rent control, Department of Education buildings that perhaps ought to be reused instead of sold, divesting NYC's pension fund of fossil fuel, Stringer's political ambitions, an idea for stop sign speed sensors (like traffic light speed sensors), the closure of the jail on Rikers Island, helping immigrants pay the costs of applying for citizenship, sewer problems, the placements of homeless shelters, and helping residents use their on-time rent payments to count towards credit scores. My neighbors care about a lot of different things. I took a few notes and mostly sketched. There was this one power outlet mechanism embedded in the desk right in front of me and I drew it like five times and never got the angles to look right.

One interesting thing I learned: when the Comptroller's office audits a city department, it usually takes about 18 months, so they only go in and do an audit if they think it's likely they'll find something. 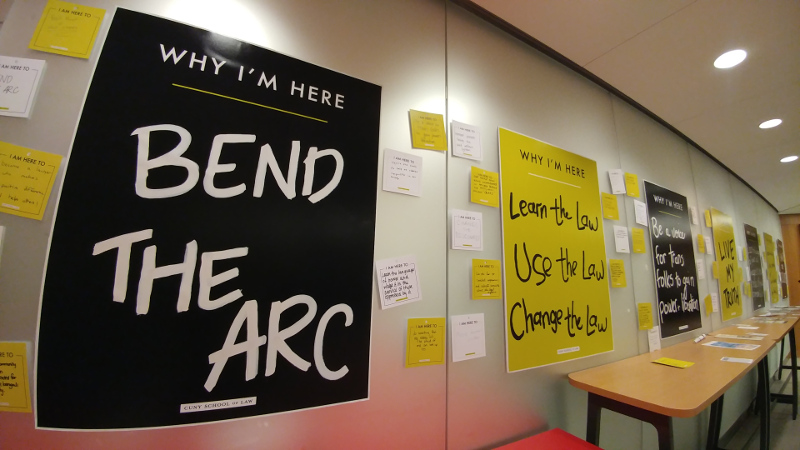 I went home and commented on the proposed National Park Service rule change "Special Regulations, Areas of the National Park System, National Capital Region, Special Events and Demonstrations". I commented on 4 things: making the swimming/wading rules more consistent, removing the "duplicative" criterion, the "atmosphere of contemplation" expansion, and the proposed permit application fees. And then I wrote a thing to prepare for a meeting today, while texting with a friend who's going through a rough time.

I don't know anyone who's not going through some kind of rough time. Or at least I can't think of any. If nothing else we have the awful "well, MY life is great, but the world is horrifying" awareness; it feels like we're betraying our neighbors when we enjoy our personal successes. I never know whether I'm doing enough; I have to define "enough" for myself, which feels audacious. Willow Brugh wrote about how she's implementing a concept I first heard about from Abi Sutherland in December 2016:

While I am pushing to find ways to gain (and deserve) greater influence in the world, those things which fall outside of my influence cannot be that which concerns me most. To do otherwise is a path to madness. I must trust that other capable people exist in the world, and that they are taking up their share just as I am taking up mine. As you are taking up yours.