Hi, reader. I wrote this in 2015 and it's now more than five years old. So it may be very out of date; the world, and I, have changed a lot since I wrote it! I'm keeping this up for historical archive purposes, but the me of today may 100% disagree with what I said then. I rarely edit posts after publishing them, but if I do, I usually leave a note in italics to mark the edit and the reason. If this post is particularly offensive or breaches someone's privacy, please contact me.

I had a pretty full weekend here in Queens.

Saturday morning I went to an information session in Flushing about a business plan competition in Queens. About 170 new or small businesses enter each year for a chance at one of three $10,000 grants (the three categories: Food, Innovation, and Community). I also learned more about the Entrepreneurial Assistance Program, a 10-week, $500 night course. I am thinking seriously about doing this; my MS in Technology Management focused much more on big corporate tech than on solo entrepreneurship, and it's been several years since that coursework anyway.

Then I went to Maker Faire to help staff the table for MergeSort, the new New York City feminist hackerspace. A year or two ago I entertained the idea of cofounding a feminist community workshop in Astoria and decided I did not want to try without several dedicated cofounders. Then, a few months ago, I happened to meet Anne DeCusatis on the subway (she noticed my laptop stickers) and found out that she and Katherine Daniels are founding MergeSort! Right now it's a monthly meetup in Brooklyn.

I brought my zines "Cat, Dog, and Badger Each Own A Bookstore. They Are Friends." and "Quill & Scroll" and taught passers-by how to turn the letter-sized sheet of paper into an eight-page booklet with one slit and a bit of folding, just as Liz Henry taught me at that Double Union workshop where I started "Cat, Dog, and Badger." (Brendan, there are now like 150 more people who have received copies of your gorgeous illustrations of a hedgehog running an all-night bookstore.) I saw a few people I knew, and met Jenn Schiffer! 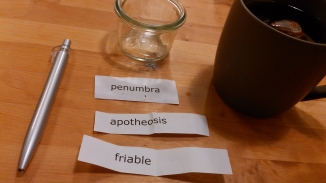 Saturday night I attended a vocabulary bee sponsored by my local bookshop. During the first round, in which we had twenty minutes to define fifteen words, I discovered I did not know the meanings of "flocculent", "phthisis", and "dipsomaniac" -- and I was slightly off regarding "trenchant" (which means "forceful" rather than "perceptive"). The MC encouraged us to write in jokes in addition to or instead of accurate answers, as the judges also appreciated and awarded points for style and hilarity. So I defined dipsomania as an obsession with the singing the "dip da dip da dip" scat from "Blue Moon", and I japed that "flocculent" is a service that lets Catholic priests monitor their congregations on Twitter during the 40 days of Lent. I made it into the oral rounds, during which I successfully defined "penumbra", "apotheosis", and "friable," each time adding a little something -- about constitutional law, about the first becoming the last, about how we, too, will crumble into ashes and dust. 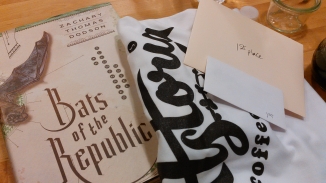 Yesterday: back to Maker Faire for more tabling. A Philadelphia visitor in an International Workers of the World shirt recognized me because of my Dreamwidth pin, but declined to sing a labor song with me. (I have been working on "Banks of Marble," personally.) It feels possible at this point that the majority of the sentences Anne has heard me say are: "Hi there, we're starting a feminist makerspace here in New York City." (A little misleading, since I am not one of the founders, but hey, clarity over precision for a carnival barker's patter.) I can stay on message and repeat talking points for many hours, and was glad to deploy these skills in the service of a good cause, while also giving away silly zines about animals who own bookstores.

I grew much better at teaching people how to cut and fold the zine; sometimes, when I said to an adult or a child towards the end of the process, "Do you see how it wants to become a book?" I saw the joy of discovery and mastery in their face. "It's yours to keep," I said, and maybe they'll unfold and refold it, to understand. I think some of those people, kids and adults both, have started thinking about what zine they might make. Maybe some kid got some paper and pen on the drive home to Long Island or Connecticut or Jersey, and sat in the back seat drawing, making and numbering eight cells on a sheet of notebook paper or the back of an old math worksheet. Maybe a couple of women, on the long subway ride back to Brooklyn, used the back of a flyer to start drafting -- maybe I'll see them at a MergeSort meetup one of these days.

We ran out of zines, and of business cards, and of eighth-of-a-sheet slips Anne had printed Saturday night, and of hastily-handwritten DIY cards cut from notebook paper and the back of a mis-cut "Quill & Scroll".

I got home to a Leonard-cooked dinner, some Internet time, and a few episodes of The Legend of Korra, then the lunar eclipse, then sleep.

An Anger Playlist
Preserving Your Old Art Or Activist Videotapes

That sounds like a lovely little slice of life. :) Thank you for sharing.

I loved reading this a lot.

The main news is that I made a big mistake…

Defensive patriotism: My parents hang a little US flag in…

Contribution Metrics Are Messy: An Example