My Family And The Ada Initiative

Hi, reader. I wrote this in 2013 and it's now more than five years old. So it may be very out of date; the world, and I, have changed a lot since I wrote it! I'm keeping this up for historical archive purposes, but the me of today may 100% disagree with what I said then. I rarely edit posts after publishing them, but if I do, I usually leave a note in italics to mark the edit and the reason. If this post is particularly offensive or breaches someone's privacy, please contact me.

Please join Leonard and me in donating to the Ada Initiative. Why? Let me tell you a story, and then a surprise.

My parents came to the US from Karnataka, in south India, in the 1970s, and they were lonely. They spoke Kannada and English and Farsi and Hindi and Sanskrit, but Kannada was their mother tongue, and they arrived in Oklahoma and found no Kannadiga community to speak of. (Go ahead and groan. My dad passed on his love of terrible puns to me.) 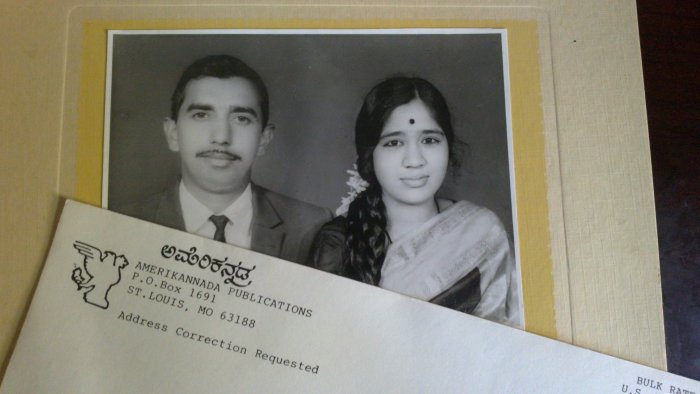 I'm not saying they were the first Kannada speakers in the US. There were definitely already Kannadigas in the US in the 1970s. Indians had been immigrating here for decades.* There were letters and long-distance phone calls and occasional visits, a few families getting together, the adults laughing and swapping tips in Kannada while kids ran around. But the Kannada-speaking diaspora was scattered and had no central place to talk with each other. A bunch of people who shared a characteristic, but not really a community.

So my parents did some community organizing, in their spare time, in between working and raising my sister and me. How did they get Kannada speakers together? They started "Kannada Koota" local organizations (like user groups). "Koota" means "meeting" in Kannada. They basically started a grassroots network of Kannadiga meetups. How did they get these folks talking to each other, all across the country? They started a bimonthly magazine, Amerikannada, and ran it for 7 and a half years, until their money and energy ran out. It had great fiction, and articles from the literary magazines back home. And it included ads for those Kannada Koota meetups, "how I started a Kannada Koota" articles, and tutorial exercises for "how to learn Kannada", for parents to teach their kids. My parents were sharing best practices, talking meta, inspiring people all over.

I didn't really know that, as a kid. As my parents processed subscriptions, recruited articles and ads, wrote, and edited, my sister and I stapled, stamped, glued, and sealed bits of paper in languages we couldn't quite yet read. We had a rubber stamp with the logo: a griffin-like creature, half-lion, half-bald eagle. I gleefully deployed those magical bulk-mail stickers, red and orange and green with single-letter codes, and piled envelopes into burlap sacks and plastic bins for the frequent trips to the post office.

It was always my Dad who took the Amerikannada mail to the post office. He was strong in those days, heaving the great bags of mail like an Indian Santa Claus (mustache yes, beard no) alongside the blue-uniformed workers on the loading dock, the part of the post office most people never use or even see. My sister and I came along, not to help -- how could we? -- but to keep my Dad company.

At home, while toying with BASIC on a PC Jr, I overheard the shouted long-distance phone calls in mixed Kannada and English. Stuff like "Go ahead and give me the directions to the venue, and I'll tell it to Veena." or "Well you know who you should talk to? Raj is going to be over there around then...." Weekend after weekend I spent reading science fiction in some corner at a Kannada Koota.**

The funny thing is that I thought I was rebelling against my parents by taking the path I did. I majored in political science at Berkeley instead of engineering, and fell in with open source hippies. I used AbiWord on Caldera Linux to write papers about nineteenth-century American political theory and naturalization rates among Indians in Silicon Valley. I fell away from coding and saw that other things needed doing more urgently: tech writing, testing, teaching, marketing, management.

And here I am now, a community organizer like them, finally appreciating what they did, what they made, what they gave up. My dad had to work to support us; he couldn't edit Amerikannada full-time, even if that would have been a better use of his talents, and a greater service to the world. My parents couldn't find enough ads and subscribers to pay for the cost of keeping the magazine going. I appreciate WordPress and PayPal all the more because I see that Amerikannada folded (partly) for the lack of them.

What if one of my parents had been able to bring in income from the community we were building? What if it had been sustainable?

Today, the community that I most identify with is that of women in open source and open culture. We've talked to each other in pockets and locally for decades - hats off to LinuxChix and VividCon, for instance - but in the last few years, The Ada Initiative has brought us more resources, a stronger community, and faster progress than ever. And this is possible because the Ada Initiative's staff is full-time.

So, here's the surprise: Leonard and I will match every donation to the Ada Initiative up to a total of USD$10,000 until midnight August 27th PDT, one week from today. Yes, again. And this time, if the community matches the full amount, we'll chip in an extra thousand dollars.

The Ada Initiative's work is useful in our own lives. When I needed an anti-harassment policy for my workplace's technical events, and when Leonard wanted resources to advise his technical communities on diversity, we consulted the Ada Initiative's resources. AdaCamp brings together, teaches, and inspires women from all over, including me. And the network I found via the Ada Initiative helped me write a keynote speech and respond to unwanted touch at a hackathon.

But more than that, we know that we're improving our world and helping science fiction, open source, and Wikipedia live up to our values. We believe in inclusiveness, compassion, empowerment, and equal and fair treatment for all, and the Ada Initiative opens the doors for more women to get to enjoy those values in the places we love.

And my parents taught me that I should give back. It feels so much better to give back than to give up.

* One couple who moved from Gujarat to California in 1958 had a son who's now a Congressman.

** Nowadays I get to be the only Kannadiga at science fiction conventions.

Thoughtcrime Experiments Anthology Is Up