The Fascination Of Municipal Taxation Software

On January 30, 2018, I attended my local city councilmember's "State of the District" speech. If one of your local officials offers such a speech, I recommend going; it's a structured way to find out what issues they think are important. And Councilmember Constantinides scheduled this one the same night as the US President's State of the Union address, which felt like a welcome alternative. 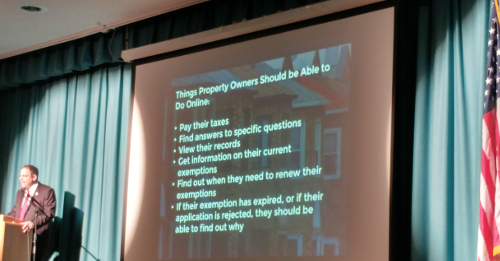 Among the plans and promises that got public notice, he mentioned a government IT project he wanted New York City to implement. In his address, Constantinides said he was introducing a:

bill that will direct the Department of Finance to create a website where anyone can view their property tax exemption status. Under this new website, property owners would be able to pay their taxes, directly submit questions to the DOF, and view their records. They'd be able to access specific information regarding their properties including applications for exemptions like the Senior Citizen Homeowners' Exemption, status of exemptions, date by which they'd need to apply to renew an exemption, or whether anything has expired in their record. If a property owner's application is rejected, they must tell you why. Property owners will also be able to set up alerts for any changes.

These are simple, common sense things that already exist on other government platforms, and the fact that the Council may have to pass legislation to create this system is very disappointing. But if we're going to ask you to pay substantial sums of your hard earned money to fund the government, the government needs to uphold its end of the bargain and give you all the tools it can to manage your payments.

The proposal caught my attention because I find it inherently interesting (and kind of amusing) when politicians give speeches about web apps. I took the photo because I couldn't remember the last time that a politician, literally giving a speech from a podium near a US flag, presented a functional spec for software he wanted, in bullet points. I'm a project manager and a programmer who has worked on multiple software projects for local governments. Some part of me, for a fraction of a second, saw that bullet list and thought, "OK, that's the scope. How many programmers do I have and what technologies will we be using?" before remembering that this was not my job.

Constantinides mentioned the bill again in a spring newsletter and I dug around a bit. Introduction 0627-2018: "Establishment of an online system to access property tax information and receive notification of changes to property tax exemptions." The Council referred it to the Committee on Finance, which hasn't held any hearings about it yet.

On the one hand, getting the local government to make a web application for property tax stuff makes obvious sense (and other localities, such as Santa Clara County, already do it). Public servants need to help the public, and so much of public service requires software. On the other hand, government IT projects have such a bad reputation. Ten years ago, Dan Davies wrote: "nearly anything new that the government does is going to require an IT element ... government projects tend to only come in one size, 'big', and to very often come in the variety 'failed'." I inhale sharply when I see someone propose a new government IT project, because I instantly foresee manifold hazards.

But we know a bit more than we did ten years ago about how to address those concerns. There's vendor lock-in, which is a big reason to prefer building or reusing open source applications. There's metadata wrangling and legacy application/infrastructure compatibility, and partnering effectively with agency staff -- 18F and the US Digital Service have grown serious capabilities in those areas. There's the challenge of serving everyone, no, seriously, everyone ("government doesn’t always appear to provide a satisfactory solution is because government has to take on the hardest problems") -- and we can incorporate "no, seriously, everyone" into our design processes....

And that last point -- about how government needs to serve everyone gets at perhaps the deepest reason this proposal caught my attention. I used to be incredibly interested in taxation, to the point where I considered following in Dr. Robin Einhorn's footsteps and going into the academy to seriously research tax history. And a big reason is that taxes affect everybody, often noticeably. A resident might be pretty oblivious to all the other ways government activities touch their life, but a ton of taxes impinge on their perception and cause notice -- income taxes, use fees, sales/value taxes, property taxes, payroll taxes, &c.

Taxes are surface areas, user interfaces, where the least-informed user unavoidably comes into contact with your system, and notices it, and (mostly) inherently resents the cost you're imposing on them, and thus finds any friction along the way particularly maddening. This reminds me of something Leonard wrote in 2003:

You can pay your San Francisco parking tickets online. This makes sense, as the general philosophy of the city of San Francisco is to make it easy for you to deal with the arbitrary aggravations they inflict upon you.

And, just like with software interfaces, tax structures have these nasty path-dependent ways of accidentally creating interest groups. Randall Munroe's xkcd #1172 ("Every change breaks someone's workflow") obscurely reminds me of Conversion and the Poll Tax in Early Islam by Daniel Dennett, Jr. -- if you use reduced taxes as an incentive for some behavior, such as conversion to Islam, and then people do that and your tax receipts go down, and then you try to make up for losses by raising taxes on the folks who now feel entitled to a tax break, the interest group you have just created will grumble or rebel.

And maybe this lens helps explain why I bang on about the governance side of maintainership, and how a bug tracker anyone can report issues to is a sign of hospitality and humility and stewardship, and and so on. Every once in a while a stranger calls me a politician. I'm not seeking elected office and I'm only as accountable to my neighbors as they are to me. But I am attuned enough to socially constructed things that I notice and try to work with them, and I try to notice where the resources come from and where they go and who ends up getting taxed, and how.

It's Not Just You

Welcome To The Mountain Goats